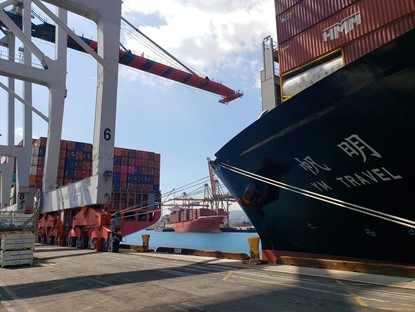 Ports and the Economy

Ports should be two-way gates – goods enter and they leave. But in the San Pedro Bay, foreign shippers kicked the gate until it broke – goods are coming in but not going out, harming the environment in port cities, eliminating jobs of California residents and causing long-term harm to local economies and businesses.

Seaports are capital-intensive facilities owned by the public. Basic standards of equity call for the direct-port labor force to be paid sustaining wages and for port-related jobs to benefit as many California residents as possible.

The challenge for the ports is that most cargo comes through major shipping lanes that have been custom-built by shipping alliances to connect Asian manufacturers with North American consumers. Within this framework, more cargo volume, lower shipping costs and larger vessels are considered better. The negative costs from this model are offloaded onto California communities and businesses.

The ports have a responsibility to recognize that they can contribute to building the economy as well as moving cargo.

The San Pedro Bay ports are legally mandated to provide economic and environmental benefits for Californians. In recent times the American factories and jobs that were supported by the ports have closed and been replaced by warehouses and trucking companies that often pay low wages. Jobs on the docks are the remaining economic benefit for the port cities of Los Angeles and Long Beach. 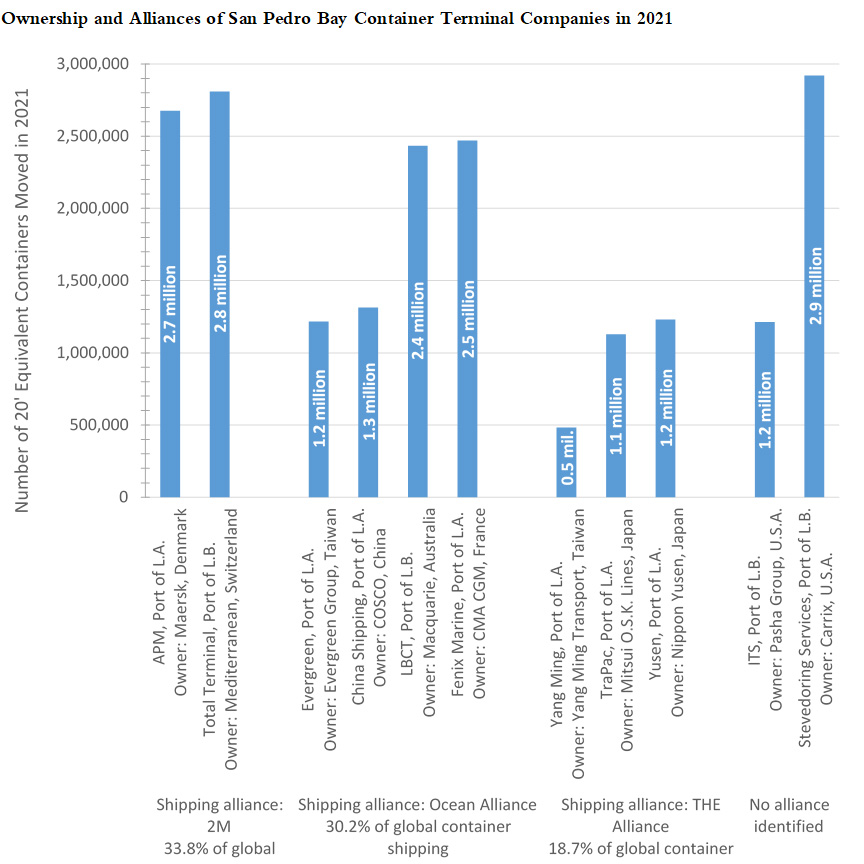 The global shipping industry responded to Covid-19 by increasing cargo rates 1000 percent and reported profits of over $190 billion in 2021. This vastly increased cost to ship cargo containers has caused and accelerated inflation and penalized U.S. exports. 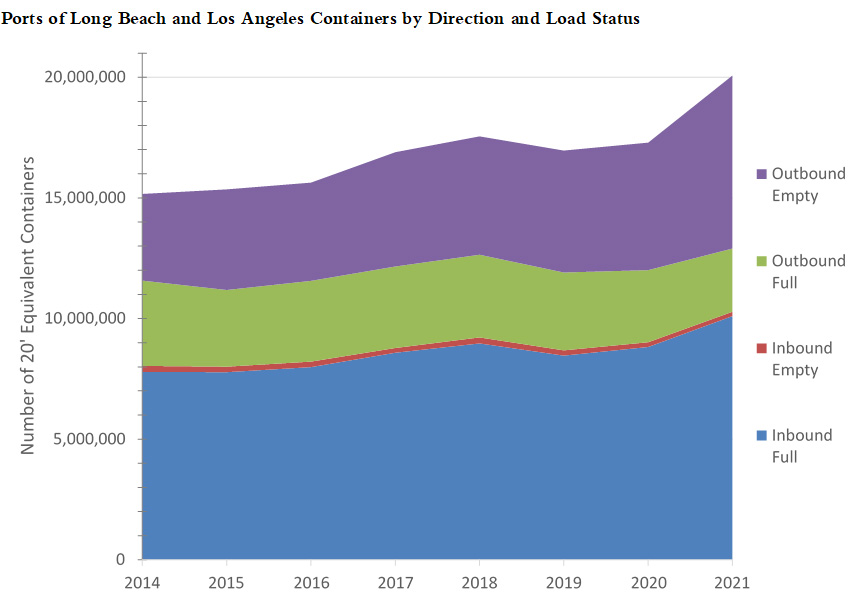 China sent 48 percent of the goods that were imported through the San Pedro Bay Ports in 2021, and was the buyer of 26 percent of the goods exported from the ports. Because imports are much larger than exports and because China’s share of exports is smaller than its share of imports, China winds up sending $12 of goods to the San Pedro Bay Ports for every $1 of exports that they receive.

The ports have bystanders in the trade conflict with China. Growing imported cargo has offset declining exported cargo. This neutrality accommodates consumer needs but it is not responsive to the economic and employment needs of California residents and businesses.

Despite American technological excellence, the dominance of imports at the San Pedro Bay Ports is especially true for high-value-added industries that provide good blue-collar jobs. The value of imports is 25 times greater than the value of exports for industrial machinery and electrical equipment, and 32 times greater for instruments.

The strongest candidates for export growth are high-skill, capital-intensive and technology-intensive industries where labor costs for skilled workers are offset by high productivity, high quality and cutting-edge technology.

The San Pedro Bay Ports can offer more support to California exporters through informed and responsive access to the ports’ logistics advantages. This requires the ports to reach out to specific industries and listen to their needs rather than their current laissez faire export practices.

The San Pedro Bay Ports are transporting goods that American residents want; however, there are significant public costs that shippers do not pay. The level of port traffic provides the basis for estimating long-term economic and environmental costs from port operations. 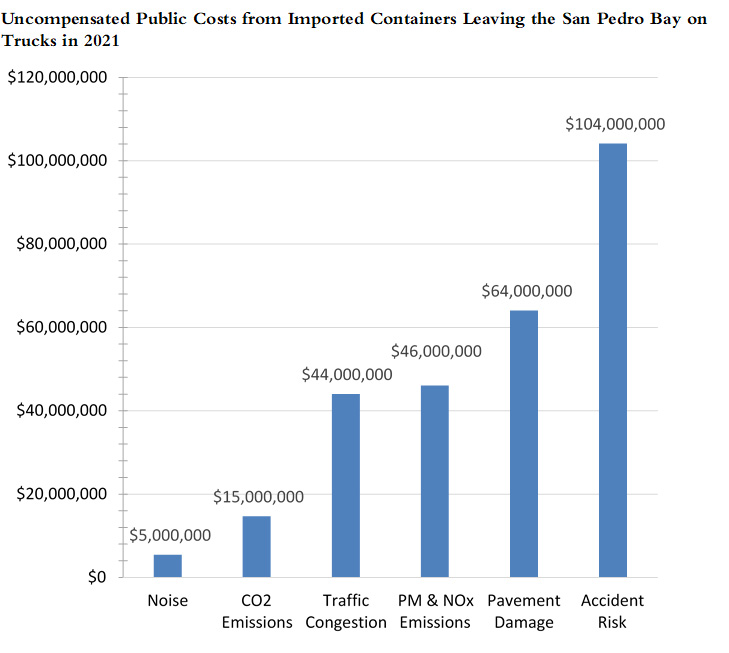 There were an estimated $279 million in uncompensated public costs in 2021 from 6.7 billion ton miles travelled by trucks leaving the San Pedro Bay Ports carrying imported containers. In addition, negative impacts on port communities include emissions of harmful criteria pollutants and significant cancer risks.

The challenge for the ports is to ensure that transportation logistics create as much benefit as possible and as little loss as possible for California residents.

Four percent of global container terminal capacity has been automated. This includes Long Beach Container Terminal (LBCT) at the Port of Long Beach and Trans Pacific Container Service Corporation (TraPac) at the Port of Los Angeles. A conservative analysis of job loss shows that automation eliminated 572 full-time-equivalent jobs annually at LBCT and TraPac in 2020 and 2021.

Studies of actual outcomes from port automation by Moody’s Investors Service, McKinsey & Company and the International Transportation Forum have found that cost savings are doubtful. In practice, automated ports are generally less productive than their conventional counterparts. The productivity of automated ports is 7-15 percent lower than for non-automated ports. Even if cost savings materialize, the profits leave the United States and go to foreign owners.

Despite the doubtful financial outcome, automation brings one advantage for shipping companies: elimination of the inconvenience of dealing with American workers and, more specifically, the union that protects dockworkers.

The narrow interest of foreign shippers appears to focus on minimizing their reliance on American labor while still delivering their products to American consumers. Their perspective fails to consider the interests of port cities or California’s workers. Automation eliminates dockwork jobs, which are the largest remaining benefit that ports provide to port cities.

In a typical year, 13,000 workers are employed on the San Pedro Bay docks, some full-time, others part-time. There are roughly 19.5 million hours of work moving cargo through the ports, with wages of roughly $1.2 billion for this work. 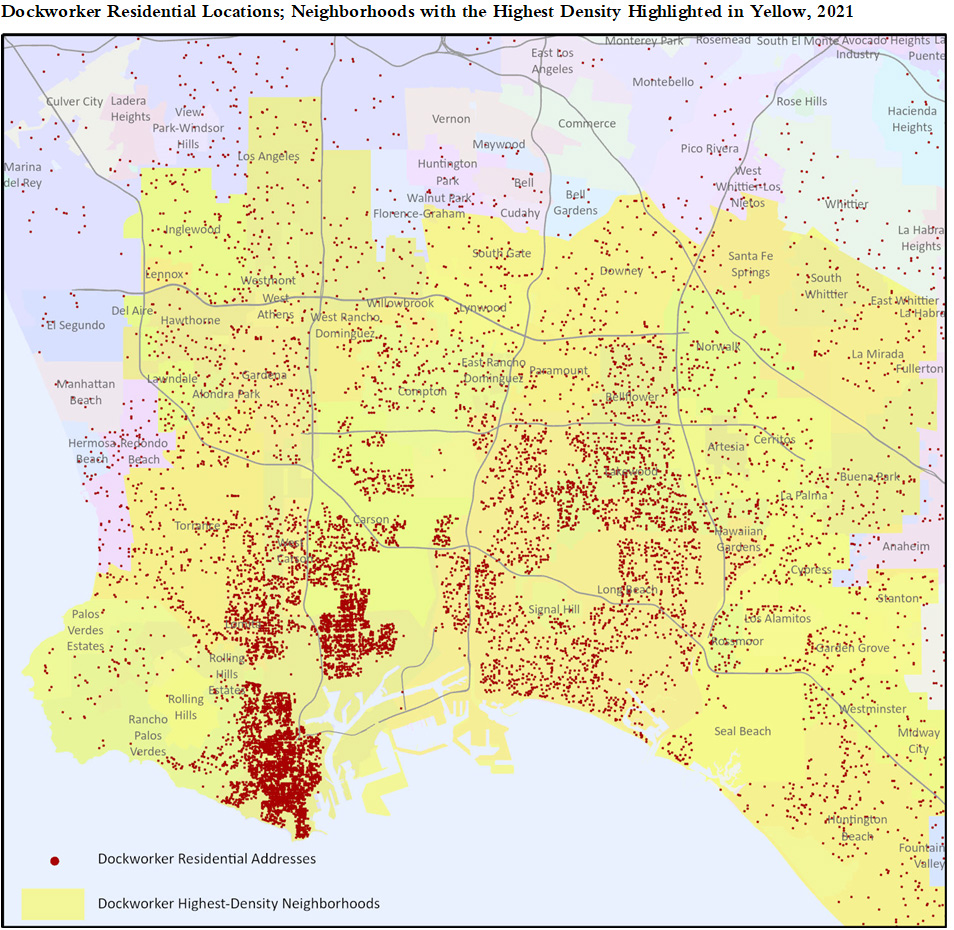 The average hourly wage for all hours worked in the ports in 2021 was $62.44, and the median wage was $59.95. (The median reflects the typical worker, the one in the middle, the average reflects all workers.)

Dockworkers perform high-value-added work and a strong union represents them. As a result, they are well compensated and bring significant economic benefits to local communities.

The homes of dockworkers are tightly clustered near the ports in San Pedro and Long Beach, and radiate out throughout Los Angeles and Orange Counties.

An estimated 3.1 million persons in 981,000 households, and 1.5 million employed workers live in communities where there is a strong presence of dockworkers, and where they make an important imprint on the local economy. 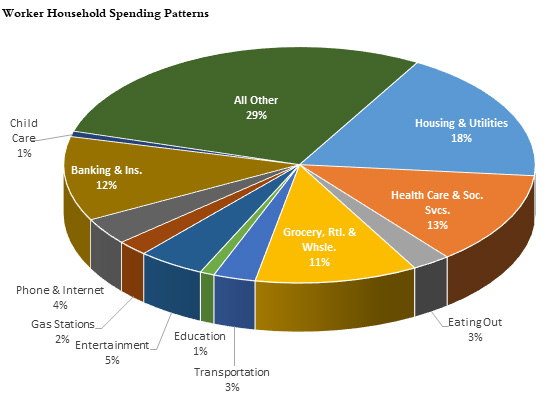 Non-port businesses and their workers in Southern California benefit from the household spending of dockworkers, which supports the equivalent of 7,065 year-round jobs and $1.376 billion in sales by businesses.

Ports must provide public benefits that offset their negative impacts on port cities in order to be true to their public trust. Jobs are the most fundamental benefit, beginning with jobs on the docks and extending to manufacturing industries with export capabilities.

Ports need to be community managers acting in the public interest, and able to bridge the demands of parties beyond the port by providing innovative transport solutions for California firms and by protecting jobs linked to the ports.

The ports are a key hub in an extraordinary international transportation infrastructure for distributing goods. This valuable locational advantage should be used to stimulate manufacturing growth in California and safeguard jobs in port communities.

These eight recommended actions build on data analyzed and presented in this report. The recommendations align the policies of the San Pedro Bay Ports with their legal mandate to serve the interests of California residents.

Supply-Chain Workers Have the Power—and They’re Ready to Use It
By By Rachel Phua, The Nation (November 18, 2022)

Why Does The U.S. Lag Other Nations So Badly In The Automation Of Its Ports? (And Is That Good Or Bad?)
By Emily Schmidt, APM Research Lab (November 3, 2022)

Before the holiday season, workers at America’s busiest ports are fighting the robots
By Andrea Hsu, NPR (September 11, 20229)

Automation and the trade deficit are decimating US ports
By Michael Sainato, The Real News Network (August 10, 2022)

A West Coast port worker union is fighting robots. The stakes for the supply chain are high
By Hellenic Shipping News (July 26, 2022)

A West Coast port worker union is fighting robots. The stakes for the supply chain are high
By Bob Woods, CNBC, (July 23, 2022)

Should L.A. and Long Beach Get a New Deal From Their Powerhouse Ports?
By David Bacon, Capital & Main (July 6, 2022)