Working for the Mouse

A Survey of Disneyland Resort Employees

Disneyland Resort is the most iconic theme park in the world.

Disney’s best-known characters are present in the park and woven into America’s national culture, recognized and celebrated around the world. People share more photographs from their visits to Disneyland than from any other place in the world, making it the most Instagrammed location on earth.

In 2016, 27.2 million people visited the Anaheim, California theme park. It generated over $3 billion in revenues for the Walt Disney Company. 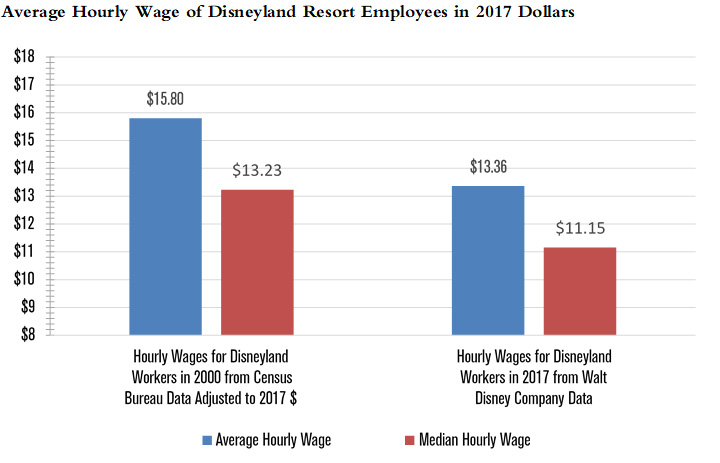 Walt Disney is often quoted as saying, “You can design and create, and build the most wonderful place in the world. But it takes people to make the dream a reality.” However, the people in this equation are being shortchanged.

Disneyland employees report high instances of homelessness, food insecurity, ever-shifting work schedules, extra-long commutes, and low wages. While there is national attention on the minimum wage with successful local efforts to raise the minimum wage to $15 an hour, more than 85% of union workers at Disneyland earn less than $15 an hour. Notwithstanding their economic hardships, four-fifths of employees say they are “proud of the work I do at the Disneyland Resort.”

Despite steep increases in the cost of housing and other necessities, Disneyland workers have suffered steady pay cuts and continue to struggle to make ends meet. 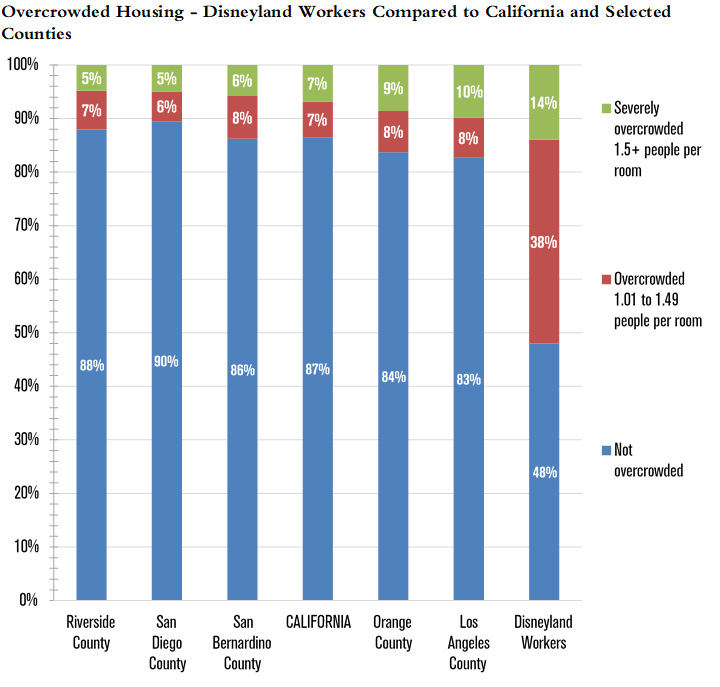 Many Disneyland workers do not have reliable access to a sufficient quantity of affordable, nutritious food.

Most Disneyland workers are mature adults and the job is their career and their livelihood.

Disneyland parents are among the most negatively impacted by the resort’s policies. 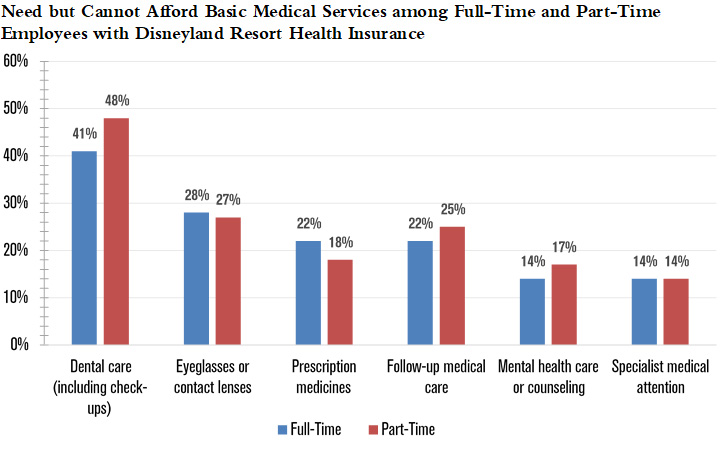 Many Disneyland workers live in outlying communities in order to find housing they can afford.

Raising the wages of Disneyland workers will be a powerful regional economic stimulus.

Declining wages for Disneyland workers have weakened the regional economy. 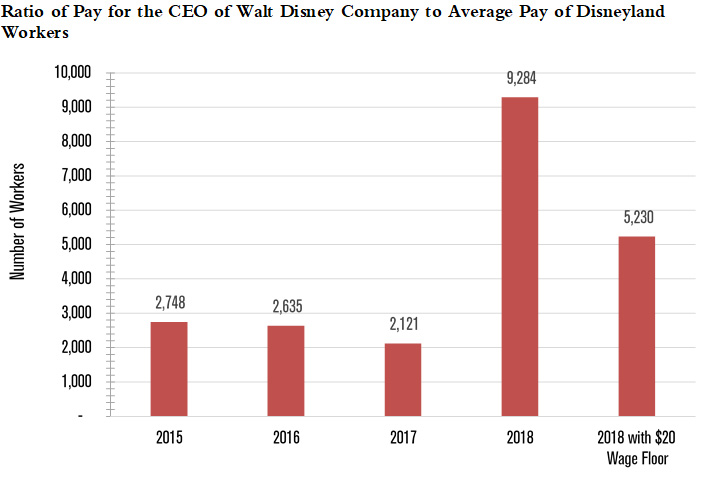 There is an extraordinary pay gap between the Walt Disney Company CEO and frontline workers at Disneyland.

Disneyland produces large profits and can afford to pay workers a living wage.

Findings are based on a survey of  Disneyland Resort employees that generated 5,000 responses, with supporting information from public datasets that describe these workers.

The survey, conducted in October 2017, revealed that while most Disneyland Resort employees – referred to as “cast members” by the company – are proud of the work they do, they feel undervalued, disrespected, and underpaid.

Survey respondents’ comments about their employment at Disneyland Resort:

“I have been working for Disneyland for almost 28 years and I make less than $20 an hour. If I didn’t have my husband to help with the bills and other life expenses, I would be living out of my car, or worse, homeless. Disney has increased admission tickets, food & merchandise has increased too. Yet, the front of line ‘Cast Members’ are struggling to pay their mortgage/rent, groceries, transportation and other daily/monthly bills. I am not asking to get rich by working for Disney, but I am asking for fair pay for fair work. I expect to be able to not worry, to not stress, about having food to eat and a roof over my head.”
– Merchandise host at Disneyland Resort for 28 years

“It’s really sad that after working 16 years for Disney I’m not making enough money to pay bills and when I do pay bills, there is not enough for other things like enjoying a nice meal with family or going on vacation. I sometimes stress on how I will pay rent, food, gas, and other expenses. I recently had to work Monday-Saturday and had 1 day off (Sunday,) just to pay bills.”
– Merchandise employee for 16 years

“I loved the work I did for the Disneyland Resort. It was one of the best, most fun, and rewarding (personally) jobs I’ve had. But making magic doesn’t pay the bills. It doesn’t feed my children, keep a roof over their heads, put clothes on their back, or keep the electricity on. How are we supposed to make magic when we can’t even afford to live?”
– Former employee who worked at the park for 3 years

“Disney has become a nightmare to work for. The long hours, lack of livable wages, and zero respect has got to stop.”
– Full-time worker

“Disneyland truly is a magical place for the guests but it’s a life struggle for all the employees. Something needs to be done or more and more people will lose time with their families, friends and even their very lives.”
– Full-time wardrobe worker

Why working at Disney, the ‘Happiest Place on Earth,’ is a misery for many
By Eric Spitznagel, New York Post (December 17, 2022)

Disney Is Losing Its Magic, New Report Indicates
By Luke Dammann, Inside the Magic (November 4, 2022)

Disney Is a “Nightmare to Work For,” Long-Time Cast Members Say
By Andrew Boardwine, Inside the Magic (April 8, 2022)

California’s Disneyland may not be the happiest place on earth for cast members: Study
By Haley Chi-Sing, Fox Business News (April 7, 2022)

The ‘happiest place on earth’ is the complete opposite for its workers
by: Cali Jackson, ABC News (April 7, 2022)

Disneyland Ticket Prices Increase Yet Again. When Will Employees Get A Boost?
By Claire Schad, New University (November 7, 2021)

Lawsuit Against Disney Granted Class-Action Status
By Krysten Swensen, Inside the Magic (July 23, 2021)

Disney Sued by Labor Union for Failing to Pay Living Wage: Employees Have to ‘Live in Their Cars’
By Tarpley Hitt, The Daily Beast (December 11, 2019)

Disney heiress Abigail Disney calls for company to “reward all of your workers fairly”
By Kate Gibson, CBS News (April 23, 2019)

Disneyland employees get wage increase, but it is not enough
By Nathan Kiesselbach, The Hornet (April 4, 2019)

Disney Could Save Millions on Wages by Giving Back Hotel Subsidy
By Gene Maddaus, Variety (August 29, 2018)
* Corrections to information attributed to the Economic Roundtable have been requested twice, but not yet published by Variety

Disney is Giving Some Theme Park Workers a $15 Minimum Wage After Months of Union Pressure
By Natasha Bach, Fortune (July 27, 2018)

Disneyland agrees to pay its workers $15 an hour
By Nathaniel Meyersohn, CNNMoney (July 27, 2018)

Outside Disneyland, a Reminder for Governments to Be Careful What They Wish for
By John Buntin, Governing (April 2018)

The homeless Disney worker who died alone in her car became the face of a public debate, but all she wanted was privacy
By Theresa Walker, Orange County Register (April 3, 2018)

Are Disney Workers Having a Hard Time Making Ends Meet?
By Michelle Chen, The Nation (March 14, 2018)

America is Disneyland
By Chris Kanthan, Nation of Change (March 7, 2018)

Keep the city of Anaheim out of Disney labor dispute
By The Editorial Board, Orange County Register (March 7, 2018)

Disneyland’s low pay is a reminder that benevolent corporations do not exist
Letters to the Editor, Los Angeles Times (March 6, 2018)

Disneyland employees struggling to keep up with cost of living
By Zac Fyffe, Best in AU (March 3, 2018)

Down and out in Disneyland: study finds most LA workers can’t cover basic needs
By Paulina Velasco, The Guardian (March 1, 2018)

Survey finds 10 percent of Disneyland employees have been homeless in past two years
Tribune Media myfox8.com and Wire Fox 61 and Oklahoma’s News 4 (February 28, 2018)

10% of Disneyland Employees Have Been Homeless in the Past 2 Years, Union-Funded Wage Report Finds
by Tracy Bloom and Chip Yost, KTLA5 News (February 28, 2018)

Disneyland Employees Have Had To Use Food Stamps, Risk Homelessness Due To Low Wages, Union Claims
by Aaron Homer, Inquisitr (February 28, 2018)

Disneyland Resort Workers Are the True Magic-Makers, But a Survey Shows Many Toil in Poverty
by Gabriel San Roman, OC Weekly (February 28, 2018)

Some Disneyland workers get paid so little they experience homelessness
By CBS 8 San Diego (February 27, 2018)

By Day, a Sunny Smile for Disney Visitors. By Night, an Uneasy Sleep in a Car.
By Jennifer Medina, New York Times (February 27, 2018)

Broadcast Coverage of Working for the Mouse