Too Big to Govern

Amazon is flourishing as a corporation. On good days in the stock market it is worth $1 trillion, making it most valuable company on the planet. Amazon has come of age financially. This report examines its standing as a socially accountable corporate citizen, with close attention to the impact of Amazon’s logistics operations on the public balance sheet in the four-county Los Angeles region. This region purchased an estimated $7.2 billion in goods from Amazon in 2018. 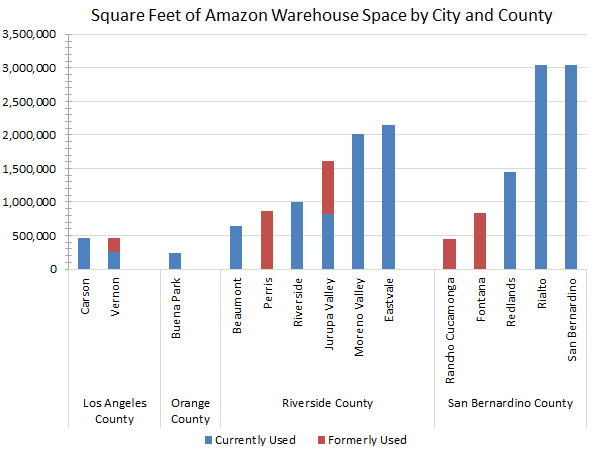 Amazon’s trucks hauled an estimated 15.5 billion ton-miles of truck cargo in the region last year, altering how land is used, making heavy use of the transportation infrastructure, affecting air quality, and shaping the economic and living conditions of workers and their families.

Amazon’s warehouses have been welcomed by some communities as a source of jobs and economic growth, but there has not been an assessment of the costs of its presence. As with individuals, communities that have come of age are able to make decisions that shape their own future and safeguard their own well-being. The most successful cities take purposeful action to influence the economy in ways that help workers earn sustaining livelihoods.

Amazon’s customers are concentrated in affluent coastal and hillside neighborhoods, but warehouses and workers are concentrated 60 to 70 miles away in struggling working class communities. This geographic divide reflects the economic polarization and structure of privilege in the four-county region. And public infrastructure and local communities bear the financial and environmental costs of trucking goods from ports to warehouses to consumers. Truck routes from ports to warehouses traverse low-income communities of color, adversely affecting air quality and health in those communities.

The popularity of Amazon attests to its excellent customer care. This report provides a balance sheet from the public perspective to support greater transparency in fiscal policy, broader risk assessment, and financial equity with the employees and communities that drive its profitability.

Impacts on the Land and Air

With an average of 2,180 miles traveled per flight, Amazon’s flights into and out of airports in Riverside and San Bernardino counties released an estimated 620,000 metric tons of CO2 into the atmosphere in 2018. The climate change resulting from those emissions creates an estimated $45 million in social costs for impacts on agricultural productivity, human health, flooding, and ecosystem services.

Amazon’s intense, demanding corporate culture has benefited those at the top, but not necessarily workers who do the heavy lifting of the logistical network that brings packages to our homes. Proximity to lower-income neighborhoods in the four-county region facilitates Amazon’s access to a job-hungry labor force. At the same time, the wages paid by Amazon perpetuate the economic struggle in these neighborhoods.

Amazon’s warehouse jobs are grueling and high-stress. Customer orders must be assembled and delivered on rapid schedules. Warehouse workers wear tracking devices that management uses to monitor where they are at any time, how many steps they take to get their packages assembled, and how long it takes to pick up each item. Those who can’t meet the assembly quotas are terminated. 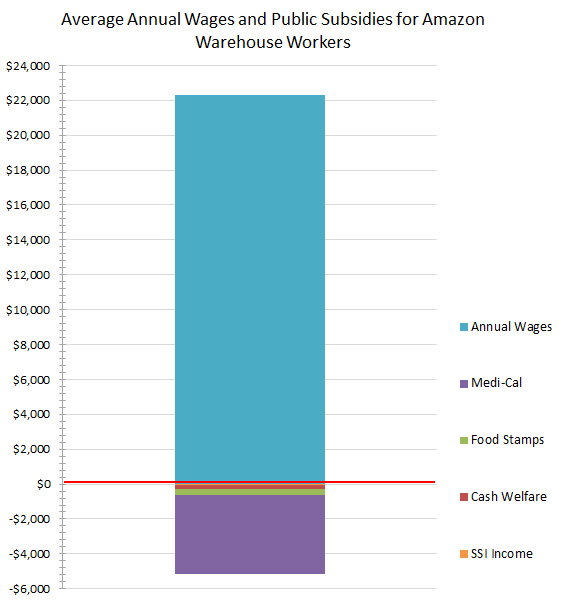 Most logistics employees are working full-time to support their families but 86 percent earn less than the basic living wage for Riverside and San Bernardino counties. The typical worker had total annual earnings in 2017 of $20,585, which is slightly over half of the living wage. Fourteen percent were under the federal poverty threshold and another 31 percent were just above the poverty threshold.

Public benefit amounts remain high even for full-time warehouse workers. Workers who were at the job 2,080 hours a year (40 hours a week, 52 weeks a year) received an average of $5,094 in benefits to make up the deficit in the basic needs of their families that were not met by their wages. 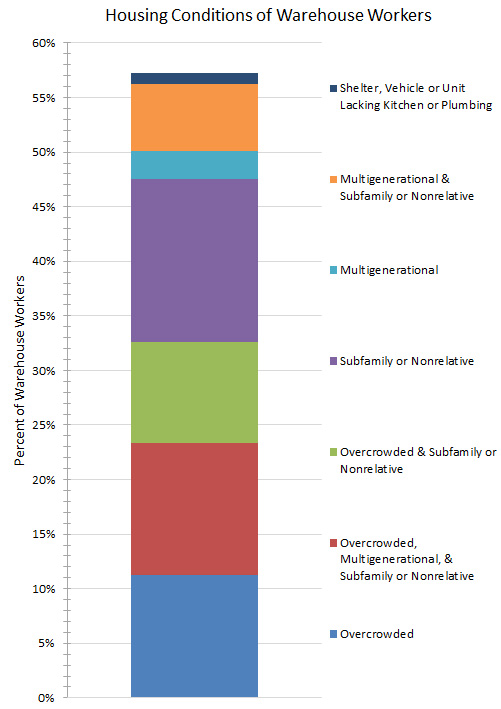 As a consequence of having low wages and insufficient incomes to afford adequate homes for their families, 57 percent of Amazon warehouse workers live in housing that is overcrowded and substandard. There is direct and indirect evidence of significant homelessness among warehouse workers.

The economic condition of logistics worker contrasts starkly with workers employed in Silicon Beach and Hollywood in entertainment, computer and mathematics jobs. These workers make a living wage and earn enough to afford housing and buy Amazon products. The higher standard of living they enjoy demonstrates that when the job market or the regulatory environment requires it, Amazon can afford to pay sustainable wages.

Seven cities completed environmental impact reports (EIRs), which represent the highest level of local policy analysis regarding Amazon’s impacts. These EIRs supported development of over 36 million square feet of warehouse space and up to 89 plane flights a day. No impacts on the environment, transportation infrastructure or human well-being were identified that warranted stopping a project. Often job creation was identified as the reason for proceeding with a project.

The only benefits that cities are receiving from Amazon’s warehouses are from construction jobs and fees, and employment of residents in low-wage warehouse jobs, along with modest, trickle-down multiplier effects as they spend their sparse earnings. Cities do not receive sales tax revenue from the sale of goods in these warehouses.

The “overriding consideration” put forward in EIRs, that Amazon’s warehouses would provide good jobs and strengthen the economy, does not stand up to scrutiny. This report shows that Amazon’s trucks cause extensive uncompensated damage to public roads and Amazon’s warehouse jobs pay so little that workers can’t afford adequate housing and rely on public assistance. The substandard housing conditions of Amazon’s warehouse workers and their inability to afford food or healthcare for their families weaken the economies of cities.

Public tools for assessing and regulating Amazon’s impacts are inadequate. The available policy review tools are used infrequently, look only at fragments of Amazon’s local impacts, and show a strong pro-development bias. 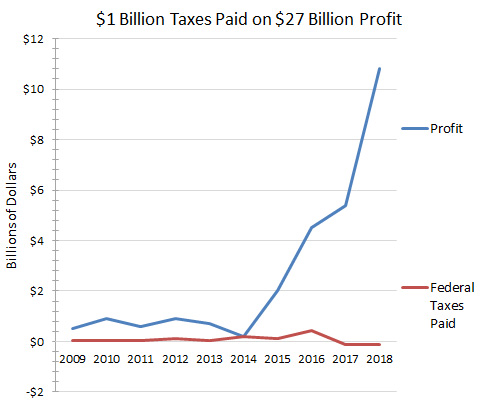 A new oversight structure is needed to assess the risk and impacts of Amazon’s activities, and to establish regulatory standards that require the public balance sheet from Amazon’s operations to pay its full costs to the public and to employees.

Controversy has surfaced about Amazon’s scant corporate income tax payments and whether it is contributing adequately to the general welfare. Over the past decade, Amazon has paid less than three percent of its $27 billion in profits for federal income tax.

This report uses publicly available data to estimate Amazon’s impacts. The directional findings are sound and often conservative, with methods and sources referenced throughout. Amazon is a data-rich organization with extensive information about wages, working conditions, public subsidies, logistics operations, and carbon footprint. We recommend that Amazon collaborate in improving the accuracy of this public balance sheet.

Amazon has received nearly $850 million in public subsidies in the four-county region, some documented in public records, others estimated. This includes: 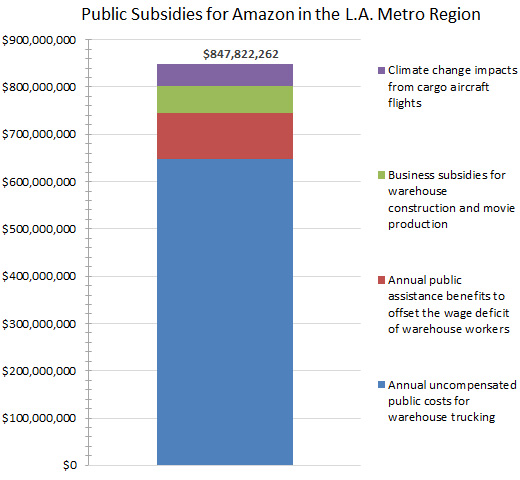 This is only a partial list, for example, it doesn’t include public costs to offset the wage deficits of underpaid delivery drivers employed by Amazon and its subcontractors.
Only 7 percent of the public subsidies that Amazon has received are one-time outlays. The other 93 percent of subsidies are ongoing and will recur year-after-year until Amazon raises wages and lowers greenhouse gas emissions.

American society expects that adults will pay their own way in the world, clean up their messes, and reciprocate what others do for them. These expectations are reasonable for corporate citizens as well.

Amazon has grown explosively as an autonomous, fresh thinking, hard driving organization that has taken maximum advantage of every freedom and opportunity allowed it. But it is no longer just an agile adventurer. Amazon is now a dominant force in shaping communities where its logistics operations are located and its workers live. It is restructuring industries, destroying brick-and-mortar retail jobs and replacing them with warehouse and delivery jobs.

Phaeton (cover image) did not know his limits, overreached and fell to his own destruction. Amazon can avoid this fate by finding its footing as an equitable community partner and continue to rise both as an economic success and a corporate citizen.

It is time for Amazon to come of age and pay its own way. This means paying its full costs to the communities that host it and the workers who create its profits. Amazon will benefit when its workers have living incomes because they will have the buying power to purchase the products it sells.

Based on the findings in this report, the Economic Roundtable makes the following nine recommendations for achieving equity in Amazon’s logistics operations:

The Quest to Green an Empire of Mega-Warehouses
By Patrick Sisson, Bloomberg CityLab (June 14, 2021)

Here’s what Amazon promised Utah in 2019 and what it has delivered
By Clara Hatcher, The Salt Lake Tribune (January 08, 2020)

Amazon has too much power over our economy: activist
By Nick Rose, Yahoo Finance (November 29, 2019)

Amazon pushes back against accusations its warehouses harm the communities that house them
By Evie Fordham, Fox Business News (November 27, 2019)

A new group thinks Amazon is ‘too big to govern’ and wants to lead the resistance
By Juliana Feliciano Reyes, Chicago Tribune (November 27, 2019)

Amazon Abuses Workers and the Climate—Because It Can
By Sonali Kolhatkar, Truth Dig (December 5, 2019)

Criticism increases as the peak season for Amazon arrives
By James Lew, The Media HQ (December 3, 2019)

The Amazon behemoth and its would-be grassroots David
By David Streitfeld, The Philadelphia Tribune (November 28, 2019)

The effort to challenge the Amazon increasing dominance
By jamesb, Political Dog 101 (November 26, 2019)