Los Angeles took another step toward becoming a place that works for everyone. Workers who are essential for the life of the city are better able to provide the essentials of life for their own families. Improving the lives of low-wage workers is not a zero-sum game in which one person has to lose for another to benefit. 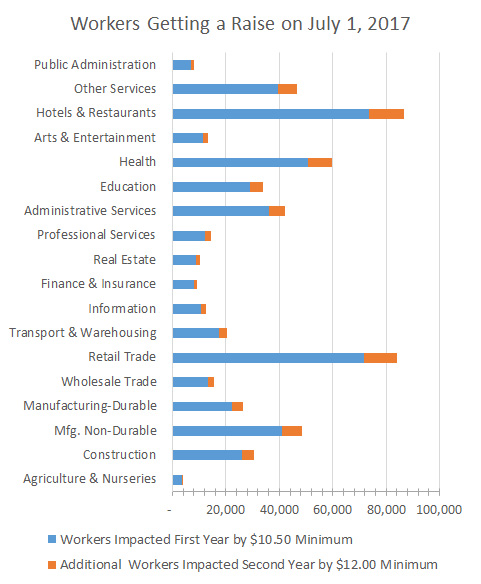 The advantages of a higher minimum wage include increased household buying power, a more stable labor force, and the affirmation of fairness in an economy where we are all interdependent and every segment of the labor force must be able to live decently for the economy to be sustainable. These outcomes benefit everyone, not just those at the bottom.

The first increase that took effect last year raised the wages of workers by $917 million. This year’s increase lifts wages by another $1.3 billion. The increase is bigger this year because in each of the five years that the wage floor steps up, an expanded group of workers gets a boost.

The 566,000 workers with pay raises are now receiving an estimated $1.3 billion more in wages than they were paid before L.A. began raising the wage floor.

Each of the five annual stepped increases in the minimum wage provides benefits to additional workers. By the end of the fifth year, an estimated 723,000 workers will receive wage increases totaling $5.9 billion annually. 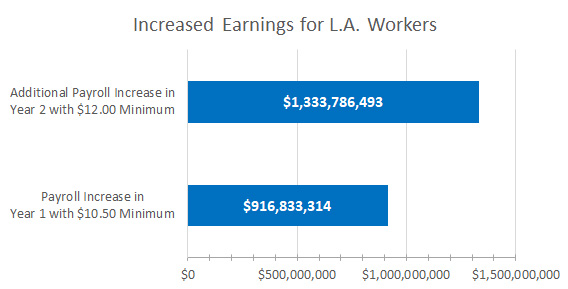 In 2015, the L.A. County Federation of Labor asked to Roundtable to prepare an objective analysis of benefits and risks from raising the minimum wage, and monitoring tool for ensuring that there are no unintended consequences.

Our analysis of the proposed $15 minimum wage, Los Angeles Rising: A City that Works for Everyone, concluded that “Paying fair wages will be an adjustment for some businesses, but the result will be a bigger, more sustainable and inclusive economy for Los Angeles.”