The deal between Albertsons and Kroger would trigger store closures, job losses and cost increases for consumers 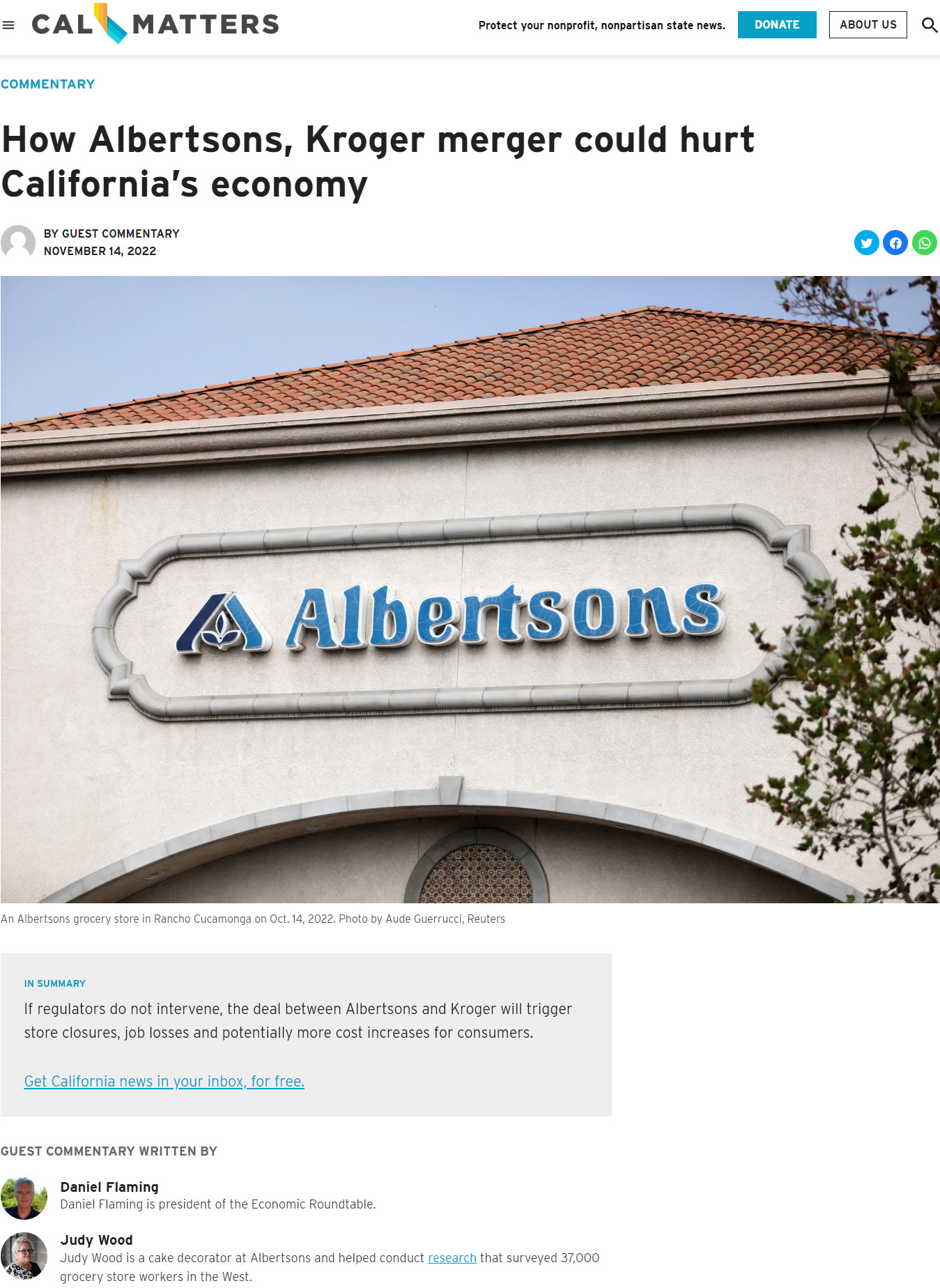 Grocery bills are skyrocketing while the essential workers who stock shelves or put out fresh produce face homelessness and hunger because they are chronically underpaid. A proposed merger between the nation’s two largest grocery corporations, Albertsons and Kroger, threatens to make a bad situation even worse.

The nearly $25 billion deal only makes sense for executives and shareholders who stand to benefit from a $4 billion payout.

Federal and state regulators have the power – and the obligation – to prevent monopolies that gouge our pocketbooks. If they don’t, consumers could wind up paying even higher prices for essentials while stores shutter.

Attorneys general in California and five other states filed lawsuits to halt the $4 billion dividend until regulatory review of the merger is completed, but a federal court denied the petition. Fortunately, a Washington court has issued a temporary restraining order, but it’s only a pause on the payment.

Consumers depend on fair play when they go to the grocery store. Elected leaders from the local to federal level must urge the Federal Trade Commission and Securities and Exchange Commission to stop this merger to protect shoppers, jobs and communities.

Kroger has become the nation’s largest grocer by relying on poorly-paid, part-time workers with constantly changing schedules, according to a report by the Economic Roundtable, which partnered with grocery store workers in Southern California.

The company’s corporate culture was laid bare during the pandemic. The company chose to close stores rather than provide so-called “Hero Pay” to essential workers who helped create their record profits. Meanwhile, Kroger increased executive compensation, bought back its stock to benefit shareholders, and last year paid its CEO 679 times more than the median employee wage.

As a requirement for the merger, Kroger and Albertsons will have to divest up to 400 stores and – as history shows us – they’ll likely be underperforming stores near others, and in low-income or disadvantaged areas.

In Los Angeles and Orange counties, 115 of 159 Albertsons, or 72%, are within two miles of a Kroger store and are targets for closure. That means 5,750 jobs could be lost in the Los Angeles region alone.

Their lost wages would eliminate purchasing power from the local economy. Their need for public income and housing support would be an added burden for our already tattered social safety net.

Additionally, millions of customers will face price increases during a time of high inflation because of the lack of competition – which executive suite talking points try to dispute. The companies’ greed also threatens suppliers throughout the supply chain by decreasing competition since the companies would gain even more leverage over the producers that feed our nation.

Profiteering stands out at Kroger and Albertsons, with profits far outpacing worker wage growth or the cost of food. Their outsize price hikes are at least partially responsible for inflation. Even while they were competing with each other, these companies jacked up prices and had record profits, a consumer watchdog group reported. If they merge and no longer have to compete with each other, they will be less constrained and free to be more rapacious.

It is urgent to act now because Albertsons is providing Kroger with a powerful “failing firm” defense of the merger. The $4 billion dividend Albertsons wants to pay out to its private equity shareholders is one-third of its current value, and sets up a potential Albertsons bankruptcy since the company is ravaged by debt.

Instead of having workers struggle with wages below the cost of living and disrespectful work requirements, Kroger and Albertsons can use the $4 billion dividend to pay their workers more, make stores safer or lower prices for customers pinching every penny they can.