Homelessness Is an Income Problem as well as a Housing Problem 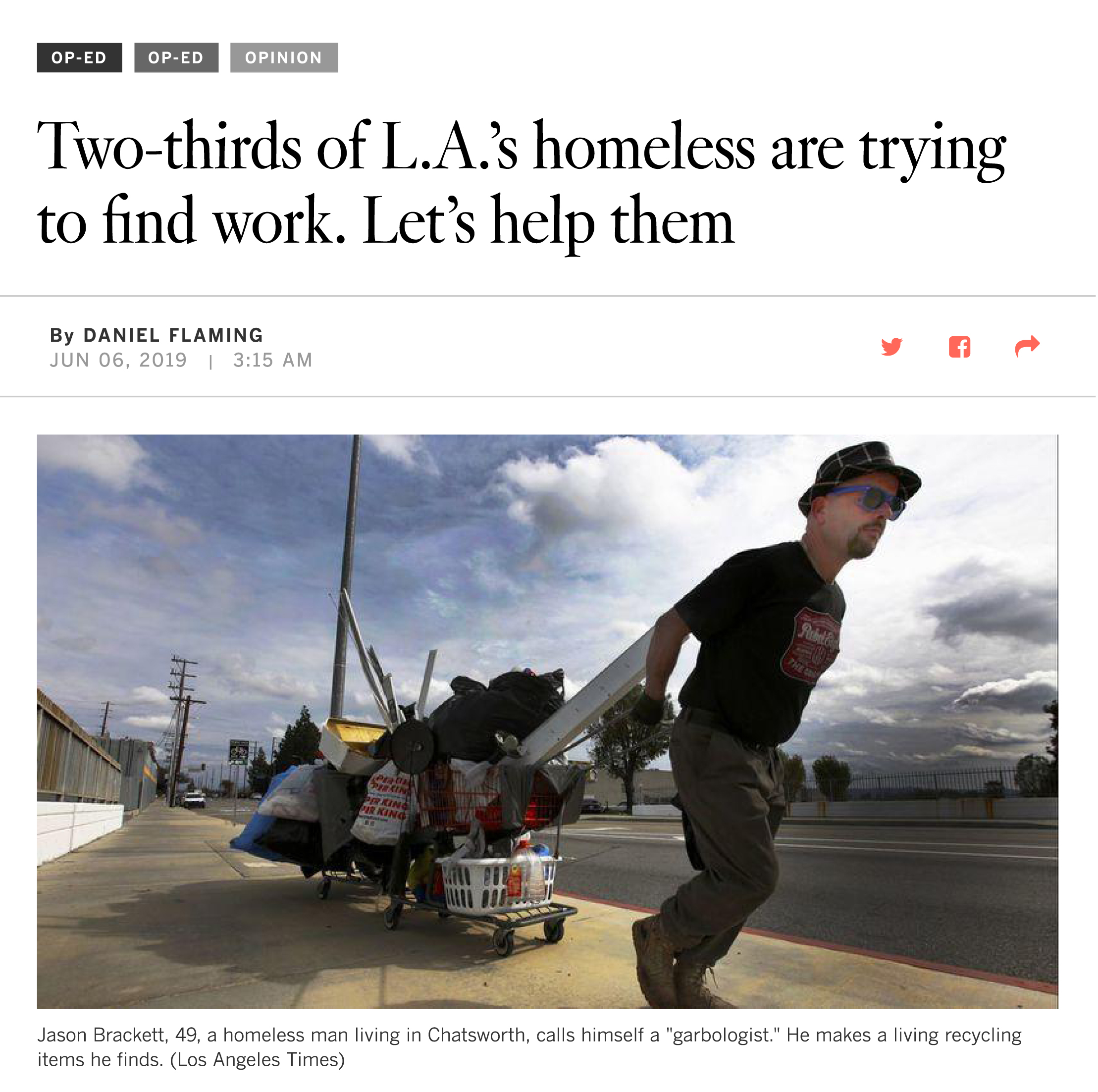 More taxpayer dollars are being spent on homeless housing and services, yet homelessness in Los Angeles County increased 12% last year and chronic homelessness is up 17%. Society needs to do better. Homelessness is an income problem as well as a housing problem — and both need to be addressed to solve L.A.’s homeless crisis.

The most frequent explanation homeless adults give for their lack of housing is the loss of a job, which meant they couldn’t pay their rent. We all know that a homeless individual needs a home — “homeless” is part of the description. But many are also unemployed workers looking for a job and a regular paycheck. Not having enough money to pay rent contributes to homelessness just as much as the lack of affordable housing does.

Two-thirds of homeless adults in L.A. County make an effort to earn money, often through informal work like recycling. If given early help, many have the potential to hold jobs, earn money, pay rent, become taxpayers. Los Angeles can shrink homelessness if these productive possibilities can be fostered. We can’t house our way out of homelessness unless the flow of people into chronic homelessness can be reduced.

The majority of those who become homeless quickly leave the streets on their own or after receiving a brief assist from service providers.

Among homeless young adults, nearly 60% are working or actively looking for a job. So are almost 50% of homeless parents with children and 40% of the newly homeless population. But as people spend time on the street this prospect dwindles. Only 20% of chronically homeless individuals are looking for work, according to research by the Economic Roundtable, a nonprofit research group I lead in Los Angeles.

Homelessness is not monolithic. The majority of those who become homeless quickly leave the streets on their own or after receiving a brief assist from service providers. The other 40% remain stuck for a year or more. These are the people we see on the sidewalk day after day. They are the public face of homelessness.

Racial and economic inequality heighten the risk of homelessness, which is five times more prevalent among African American children than among all children in Los Angeles, our research shows. The risks increase for adults, again for men and yet again with age. Black men between the ages of 45 and 54 are represented 16 times more often among the homeless than in the overall population.

To intervene effectively and equitably in homelessness, society has to recognize that race, unemployment, poverty and homelessness are intertwined.

There is a first day of homelessness for everyone. It’s hard to tell apart those destined to be chronically homeless from those who quickly escape. Everyone often receives the same brief help, but for some it isn’t enough. As people are homeless longer, serious health, mental health and drug problems become much more frequent. Health and drug problems are three times more prevalent among chronically homeless individuals than among new entrants into homelessness.

Predictive screening tools can help solve the difficult problem of telling apart people who will be temporarily homeless from those destined to be chronically homeless. These tools rely on information about employment, health problems, social services, homelessness, jail history and demographics to estimate the probability that an individual will become persistently homeless.

Earlier this year, the Economic Roundtable made publicly available two new predictive screening tools that were developed based on analysis of the records of more than 1 million people who have experienced homelessness. The tools can be used to try to target individuals most at risk for long-term homelessness. If they are identified when they first become homeless — before health and legal problems have proliferated — it is much easier to help them get a job.

This approach jumpstarts the current model of giving progressively more help to individuals the longer they remain homeless.

A third of unemployed workers who become persistently homeless are already homeless when they lose their jobs. Typically they’re working for low wages in jobs that offer part-time work and have high turnover. For example, a survey of Disneyland workers found that 11% had recently been homeless. In an Economic Roundtable report released earlier this year, we found high rates of homelessness among workers who are home health aides, domestic workers, retail clerks, restaurant workers, janitors, security guards and temp agency employees.

We can’t invest only in housing and not in jobs. Rapid re-employment opens a new line of attack by addressing homelessness as an issue of economic opportunity and human potential. Employment can provide income, dignity and housing for homeless individuals.

Rapid re-employment programs can bring workers back into the labor force and help them thrive. This requires addressing every barrier a homeless worker faces in finding a job and includes providing temporary housing, job training, childcare, behavioral healthcare and paying for apprenticeship training or temporarily subsidizing wages.

Intervening early with a job won’t solve homelessness — but it could go a long way toward reducing it.

Daniel Flaming is president of the Economic Roundtable.